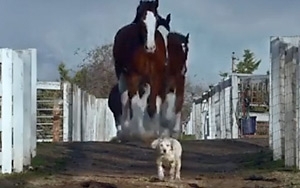 Although some research suggests TV marketers held back on revealing their actual Super Bowl commercials before the game, online activity around associated Super Bowl advertising content continues to grow.

Through Thursday, there were some 103 million video views up from 69.2 million a year ago, with 35% of Super Bowl ad plays are now on Facebook. YouTube is also a major contributor to video views total, according to iSpot.tv.

There have also been 3.1 million social actions — shares, likes, comments, tweets, and other activities around Super Bowl commercials — up from 1.6 million a year ago. There have been 1.2 million searches for specific TV commercials — more than double the 565,000 of a year ago.

Some 111 pieces of advertising “creatives” have been released — up from 49 creatives a year ago. Forty-one advertisers have released some Super Bowl-related content, up from 38 marketers a year ago.

Separately, NBCUniversal announced that a number of its prime-time shows will get a big promotional push during the game.

This includes “The Blacklist” (a 30-second spot, and an episode of this will follow the game); “The Voice” (60-second spot); and “Undateable” (30-second). New show “Odyssey” will also get a 15-second spot; the series begins April 5.