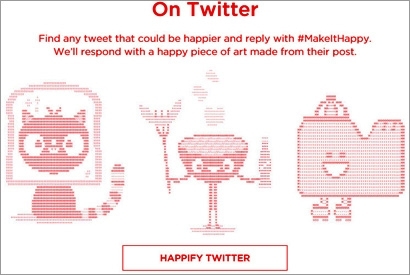 Following the airing of its #MakeItHappy ad during the Super Bowl, Coca-Cola launched a series of social media options enabling consumers to participate in the campaign's stated mission of making the Internet a happier, more positive place — including a means of transforming negative tweets to positive ones.

A digital spill timed to begin as the ad concluded spread through the Internet via mobile and other digital devices, prompting consumers around the country to visit the campaign's Web site, GoMakeItHappy.com.

Twitter users are being encouraged to "happify" Twitter by replying to negative tweets with the #MakeItHappy hashtag — whereupon the original tweets are transformed into cheerful pieces of ASCII art.

As of mid-day after the game, the "happy downloads" were fast approaching 500,000.

On Instagram, users can join a “Smile Petition” by posting a photo of themselves smiling while making a hashtag hand sign and including “#MakeItHappy” in the caption. Select images and messages are being aggregated on the campaign's site.