'Fresh Off The Boat': Chinese-Americans Emigrate To Prime Time On ABC 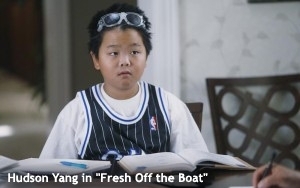 A family of Chinese-Americans moves from Washington, D.C.’s Chinatown to Orlando, Fla. in 1995, and the family’s 11 year-old son is shocked to find out that Orlando is not teeming with Chinese people.

Uh-oh! Will this Chinese-American family’s American dream be thwarted by the overwhelmingly white population of central Florida?

My guess: Probably not.

Whether their dreams are deferred or not, this family of Huangs is not exactly fresh off the boat, although this new ABC sitcom about their lives is titled “Fresh Off the Boat.” It premieres Wednesday night.

Yes, I understand that the title is a cheeky way of positioning the Huangs as “new” to their American surroundings, if not exactly recently arrived. To be specific, the 40-ish mom and dad (Randall Park and Constance Wu) may have emigrated at a younger age from Taiwan. But they are apparently Americanized enough to speak perfect English and have American names, Louis and Jessica. There is a Chinese grandmother in the show who appears sporadically to speak a few lines in Chinese, but she’s not a significant presence in the first two episodes of the series that ABC provided for preview.

The central character of the show is the couple’s chubby-cheeked eldest son (of three boys), Eddie Huang (played by Hudson Yang). He’s also the show’s narrator, a device common to TV sitcoms that I have dreaded and complained about for years — to no avail, of course.

And so, from 11-year-old Eddie, we learn how the family moved to Florida so that dad Louis could pursue his entrepreneurial dream of owning a restaurant — not a Chinese restaurant, mind you, but a Western-themed steakhouse. We also learn that Jessica is not 100 percent supportive of the move, and neither is Eddie (although his two younger brothers adapt to their new surroundings almost instantly).

Eddie is an Americanized boy who loves hip-hop, so the show features a near-constant soundtrack of ’90s rap recordings from the likes of Notorious B.I.G. and Snoop Dogg (who was Snoop Doggy Dogg back then).

With this new sitcom set in the ’90s, ABC seems hopeful that it will lure viewers of a certain age (generally speaking, those under 49) who are nostalgic for that decade. In this sense, “Fresh Off the Boat” springs from the same strategy that spawned “The Goldbergs” — also on ABC — about a Jewish family living in Pennsylvania in the 1980s.

For me, the two episodes of “Fresh Off the Boat” that I watched contained few laughs (okay — maybe I’m being a little generous here — there weren’t really any laughs), but qualified as mildly amusing.

The big distraction for me was this show’s overriding and constant preoccupation with racial and ethnic stereotypes. As you might predict (because this is so predictable), the white people are all stupid: The white women of the neighborhood are shown idiotically rollerblading as a group, and young Eddie can’t help noticing in the school lunchroom that the white kids in school bring Lunchables to eat every day -- what he calls “white people’s lunch.”

On the Chinese side, Eddie’s mother is the representative stereotype: She’s obsessed with money and education — a tiger mom before it was fashionable, according to one of Eddie’s world-weary (and tiresome) narrations.

One wrinkle in the show’s racial makeup: While the white kids make fun of the Chinese food packed in a Tupperware container that Eddie brings to school (they’re noodles and the white kids call them worms), it’s the school’s seemingly lone black kid who confronts Eddie and calls him a “chink.” I wasn’t expecting that.

I didn’t particularly care either.

Maybe my problem is that I’ve seen this kind of thing before — most notably in the Chris Rock sitcom called “Everybody Loves Chris,” based on his own fish-out-of-water childhood as a black kid in a predominantly white school in Brooklyn. “Fresh Off the Boat” feels like the same thing.

What can I say? For some reason, I don’t seem to share in this country’s preoccupation with race and racial issues. Therefore, TV comedies that are preoccupied with race are of near-zero interest to me.

I only care if a sitcom is funny, and “Fresh Off the Boat” hasn’t arrived there yet.