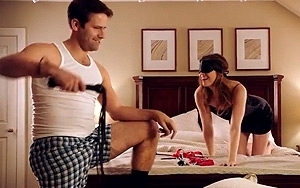 Trojan is linking a new marketing effort to the “50 Shades of Grey” film, which debuts on Feb. 13, just in time for Valentine’s Day.

The effort includes a 2-minute video on YouTube and a 15-second trailer. The trailer will run in select AMC and Regal Theaters in conjunction with an existing Trojan lubes spot also approved for cinema. It teases the long version of the spot and directs viewers to go online for the rest of the story.

The video will also be promoted on Facebook and Twitter through paid amplification, as well as via marketing to consumers through Trojan’s database and Web site. Consumers are encouraged to post their thoughts on social media using the hashtags #GetOutOfTheGreyArea and #50ShadesofTrojan.

The brand has also partnered with certified sex therapist Sari Cooper to bring the message to a wider audience through social dialogue and media interviews.

A recent survey from Trojan found that 50% of Americans feel their sex lives need charging up. The comedic Trojan short video features a couple fretting about their sex life while talking to their couples therapist. The “happy ending” demonstrates there are simple, real ways to spice things up.

The aim is to stimulate and extend the conversation among media and couples on the importance of positive sexual experiences and a fulfilling sex life, says Bruce Weiss, vice president of marketing, Trojan Brand Condoms.

“Trojan is always looking for ways to bring our pleasure products into the mainstream by fostering an open dialogue about sexual health and pleasure,” Weiss tells Marketing Daily.

The “50 Shades of Grey” movie will reignite a national dialogue about sex and pleasure, he says.

“Trojan is excited to partake in the conversation and share the real side of pleasure with couples nationwide,” Weiss adds.

The campaign aims at reaching women ages 25+, with a focus on those in a relationship.

“However, we feel the campaign message is relevant to all couples everywhere,” Weiss says.

For many couples there is a distinct difference between the fantasy of a book or movie and the reality of their daily sex lives, often feeling pressure that their sexual escapades are boring and need to be more adventurous, he says.

“Through this campaign, Trojan aims to help real couples easily bring pleasure and intimacy into their relationships, with an array of products (more than 50 shades of real pleasure), Weiss says. “There’s no need to go to extremes to have extremely good sex – you can spice up your sex life with one quick and simple trip to your local drugstore.”