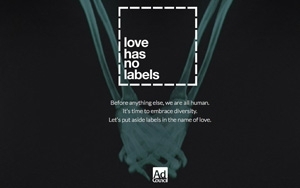 The Ad Council is joining forces with a slew of major brands for a new public service advertisement campaign combating prejudice and intolerance of all kinds. The campaign, on the theme “Love Has No Labels,” is receiving support from The Coca-Cola Company, PepsiCo, P&G, Unilever, Allstate and State Farm, among others.

Created by R/GA, the pro bono campaign includes TV, print and digital PSAs, as well as a social-media component, all delivering messages asking viewers to examine their own unconscious biases and embrace diversity and inclusion across race, religion, gender, sexuality, age and ability.

Participating brands are replacing their social-media profile pictures with the “Love Has No Labels” icon, while inviting the public to do the same, and distributing content from the campaign across their social channels.

The campaign directs interested viewers to a Web site, www.LoveHasNoLabels.com, where they can take a quiz to find out what sort of prejudices they may harbor unknowingly. The Web site was created based on insights and advice from nonprofit organizations fighting discrimination of various kinds, including the Anti-Defamation League, Southern Poverty Law Center, National Women’s Law Center, Human Rights Campaign, American Association of People with Disabilities, American-Arab Anti-Discrimination Committee, Muslim Advocates and AARP.

The campaign kicks off this month and will continue throughout the year, with additional outreach during relevant times including Pride Month, Hispanic Heritage Month and Black History Month.

Ad Council president and CEO Lisa Sherman noted that the participating brands were all chosen because of their longstanding public support for diversity and tolerance in business and society at large.