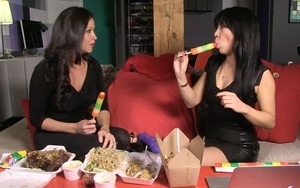 "Fifty Shades Of Grey" has pushed the acceptance level of racy content, and now Just Eat, an online restaurant and food ordering service, is testing this new tolerance with its Valentine's Day campaign aimed at Canadian residents.

Developed by digital production and design shop Jam3, the 13 Spicy Nights campaign centers around an online portal offering 13 "unique and fun nights" leading up to Valentine's Day. It is racy and only for adults over 18.

This interactive live broadcast is streamed directly to those after they place an order on JUST-EAT.ca.
"The last thing we want is to be a brand that lacks edge," says Luke Sheehan, marketing director, Just Eat. Some people don’t like what we do, but if we want to remain the market leader, our brand has to connect on an emotional level with our consumer. It’s not about trying to be controversial just for the sake of it. It’s about making memorable campaigns that our consumer responds to.

"Every creative company wants to work clients who are willing to take risks, and these days it's becoming table stakes for succeeding online," says Graham Budd, executive producer at Jam3. "This and 13 Spicy Nights are great examples of how Just Eat has whole-heartedly embraced risk-taking, ultimately to their benefit."
Meanwhile, as part of the campaign, Just Eat will also be giving out $69 vouchers throughout each night to lucky viewers.

The concept is designed to raise awareness for the brand in a way that moves beyond the traditional Valentine's Day campaign. Currently, the platform offers services from more than 4,500 restaurants in major Canadian cities like Toronto, Vancouver, Calgary, Edmonton, Montreal, Ottawa, Winnipeg and Regina. Plus, the idea stemmed from the fact that Valentine's Day is always one of the food delivery service's busiest nights of the year.

Just Eat reports it conducted 1,000 orders a minute processed on Valentine's Day 2014. "Valentine’s Day is our biggest day of the year, which informs us that people prefer to order-in and reject the norms of going to a restaurant, or simply buying flowers," says Sheehan. "Having this insight provided us with the opportunity to create an event that celebrates the notion of Valentine’s Day, but in an innovative manner that suits our brand personality. Just Eat is all about alternatives like using an app instead of dialling a restaurant, so why not provide people alternatives to a normal Valentine’s Day?"

Jam3 and Just Eat have been collaborating for over 2 years. Their last project together was the "Chompionship" which featured a national multi-stage eating contest where students from all across Canada could submit their entry to be crowned Canada's eating champion. The project culminated in the Toronto Finals, judged and hosted by the competitive eater Takeru Kobayashi.

While this campaign is specific to Canada, parent company Just Eat Group - founded in Denmark in 2000 - is active in 13 countries around the globe and develops specific initiatives to build each regional brand. However, Just Eat's other advertising initiatives aren't as risqué as this Canadian campaign. In recent months, Just Eat sponsored ITV's Take Me Out in the UK and launched TV marketing in Spain. In addition, the brand has introduced advertising in train stations in London, trams in Toronto and taxis in Dublin.