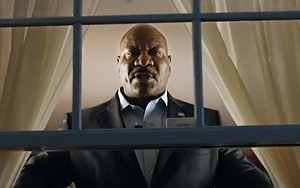 As the number of Internet-connected and home automation devices continues to increase, homeowners may be getting lulled into a false sense of security, thinking that because their home is “smart,” it must also be “safe.”

However, home security and automation company ADT is out to challenge that notion with a new campaign that asks very directly: “What good is a smart home, if it’s not a safe home?”

“With the smart home and security competitive landscape continuing to evolve every day, consumers are faced with more options than ever before,” Jason Shockley, ADT’s senior director of corporate communications, tells Marketing Daily. “With so much information and messaging out there for the taking, we wanted to make it clear to our customers that safety and security is not something that one should compromise on.”

In the new campaign, actor Ving Rhames appears as a personification of the brand. After noting that “Strong isn’t wrong,” and that brawn is best paired with brains, Rhames says (with an allusion to his infamous “Medieval” quote from “Pulp Fiction”), “I’m about to go all ‘enlightened age’ on your home.” He then shows off many of the features available through ADT, including smartphone and tablet-controlled lighting, locks and garage doors. Another ad puts Rhames on-guard in front of a home (as a personification of the “Protected by ADT” yard signs), confronting would-be burglars with the warning: “If I were you I’d turn around.”

“We feel that the personification of ADT benefits through the character played by Ving Rhames will resonate with our consumer and capture their attention,” Shockley says. “He will demonstrate both brains and brawn as he reinforces ADT’s leadership as the brand trusted by more people than any other North American security provider.”

The campaign marks a departure from the company’s previous advertising, which had been evolving from showing customers on what one executive termed was their “worst day.” A campaign from last year depicted a couple out at dinner envisioning burglars creeping through the restaurant with their possessions after one expresses anxiety about having locked their doors. Since that campaign, the company brought in a new chief marketing officer in Jerri DeVard and a new agency in Doner. (Other agencies involved in the creation and execution of the new campaign were Sapient Nitro and Mediacom.)

“We recognized a problem brewing in the Internet of Things and the category in which consumers are mistaking their smart home for a safe home,” Shockley says. “With our new campaign, we address this issue and highlight that anything less than monitored security is a false sense of security.”

In addition to the television commercials (which began running this week on TNT and AMC), the campaign includes digital and social executions (including a takeover of Yahoo Mail), and Rhames’ presence on ADT’s website, where he walks users through ADT key features and benefits of ADT’s features and services.