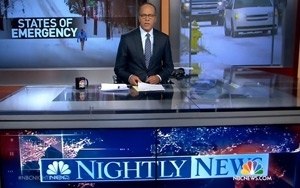 In the wake of NBC’s suspension of Brian Williams, ABC’s “World News Tonight” made some gains against the “NBC Nightly News” -- but has not overtaken it.

In total viewers, “World News Tonight” was up 2% to a Nielsen 9.032 million viewers for the most recent week (February 9 through February 15) versus the same week a year ago. “NBC Nightly News” was down 19% to 9.43 million.

NBC still leads in the key news viewers that advertisers want: the 25-54 demo. NBC is down 18% versus a year ago to 2.292 million versus ABC, which is off 6% to 2.242 million. One crucial note: in comparison to a year ago, NBC was airing the Sochi Olympics in February 2014, which gave a big boost to almost all programming that surrounded it.

Williams' six-month suspension was announced on Wednesday, Feb. 10. “World News Tonight” beat “NBC Nightly News” on Wednesday and Thursday of last week. Williams is being replaced during his suspension by Lester Holt.