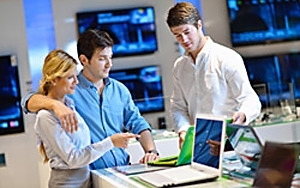 Customers who spend more time with sales representatives when purchasing a tablet or smartphone are more satisfied than those who do not.

According to J.D. Power’s latest Wireless Purchase Experience study, customers who purchased tablets were more satisfied than those who purchased smartphones, primarily due to the sales reps taking time to better understand customer needs when it comes to tablet sales.

On a 1,000-point scale, tablet owners had an average purchase satisfaction experience of 811, compared with 797 for those who owned smartphones. The reason, according to Kirk Parsons, senior director of J.D. Power’s telecomm services practice, is that sales reps spend more time with tablet customers. The average time spent going through the sales process for tablet was 62 minutes, compared with 59 minutes for smartphones.

The evidence is further borne out by significantly higher experience satisfaction ratings (149 points) among tablet owners when retail representatives offer explanations and demonstrations of a device’s operation. Sales representatives are also more likely to explain tablets than smartphones. According to the study, nearly three-quarters (73%) of tablet customers were offered explanations about how to operate the device, compared with only two-thirds (67%) of smartphone customers. Such explanations also lead to higher loyalty rates among customers. Among those who were offered product demos, 36% said they “definitely will not” switch carriers, compared with 24% who were not offered demonstrations.

“Wireless carriers need to understand the importance and value of the role sales reps play in providing product information to tablet and smartphone shoppers,” Parsons said in a statement. “When a sales rep helps a tablet shopper become familiar with the device’s features and addresses any of their concerns, it can improve the decision process and translate into a more satisfying purchase experience.”

Among full-service carriers, AT&T had the highest purchase experience ratings, with a score of 802. Among non-contract carriers, Boost Mobile and Virgin Mobile tied for the highest ranking at 795.