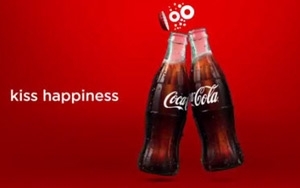 Coca-Cola is marking the 100th anniversary of its iconic green glass bottle with a new global campaign under its umbrella "Open Happiness" platform.

The ads, including four that have been posted on the videos area of the Coca-Cola Journey site and YouTube within the last three days, are also beginning to be promoted on Coke's social media sites.

Coke will make the most of the anniversary, CEO Muhtar Kent said during a presentation at the Consumer Analyst Group of New York conference last week. He described the bottle as an "enduring symbol of refreshment and happiness," and a reminder of the "unique experience of Coca-Cola" and the "beautiful design, innovation and sensory esthetics -- elements that will continue to drive our business and brands forward."

The ads are "a great example of how we're thinking about the effectiveness of our marketing," Kent said, pointing out that they will be used in marketing campaigns in more than 100 markets around the world. They "have tested very well and demonstrate our commitment to improving the quality of our ads," he added.

One ad, "Together," by video director and fine art photographer David LaChapelle, shows just the hands and forearms of a wide variety of people, paired and connecting by touching palms, fist bumps and other friendly or loving gestures.

Coca-Cola, which returned to this year's Academy Awards with ads for both regular and Diet Coke, also posted a slightly truncated version of its new "A Generous World" ad on Facebook to coincide with the awards broadcast.

The ad shows a series of scenes in which handing someone a classic bottle of Coke makes them feel better after a series of calamities, including explosions; the teaser version ends before we get to view what is casting a large shadow on the earth. Social media users were encouraged to view the video and channel their "inner screenwriters" to comment on who they thought would get the next Coke, using #AndTheCokeGoesTo.

The day following the awards, Coke posted the full video, with a surprise ending. As of mid-afternoon, the teaser version had been viewed nearly 650,000 times on Facebook so far, and was showing more than 8,400 likes and 1,000 shares. And within an hour of posting, the full version had pulled more than 8,600 views on the social site.

The agencies on the campaign include Wieden+Kennedy, Portland and Ogilvy, Paris, according to Advertising Age.