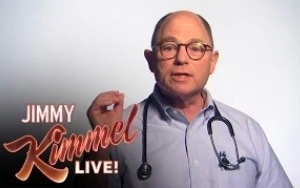 In an unusual move for the host of a late-night comedy show, Jimmy Kimmel took a strong stand Thursday night against the growing anti-vaccine movement.

He raised the issue during his opening monologue on “Jimmy Kimmel Live,” ripping parents who have decided not to have their children vaccinated against such one-time scourges as polio, smallpox and measles.

While the monologue was comedic in tone -- or at least semi-comedic -- Kimmel's disgust with the anti-vaccine crowd was crystal clear.

“Here in L.A., there are schools in which 20 percent of the students aren't vaccinated because parents here are more scared of gluten than they are of smallpox!” Kimmel said. “And as a result, we've got measles again!

Kimmel, 47, did not explain why he felt compelled at this particular moment to speak out against the anti-vaccine advocates, but it could be because he and his wife have an 8-month-old baby daughter (he also has two older children from a former marriage).

“Unvaccinated kids put all children in danger,” Kimmel said, “especially babies who are too young to get the vaccination[s].”

Comedic or not, this portion of Kimmel's monologue represented a rare (if not nearly unheard of) instance in which a late-night host came out clearly in support of one side in a divisive social controversy.

In a nutshell (and at the risk of oversimplifying the conflict), anti-vaccine advocates believe that certain ingredients in traditional vaccines that have been administered to children for generations might cause autism. One celebrity in particular who has become closely associated with the anti-vaccine movement is Jenny McCarthy, who has long blamed vaccinations with bringing about her own son's autism.

In his monologue, Kimmel derided McCarthy by name -- another unusual move for a late-night host.

“A little shot … and poof! Polio is gone,” Kimmel said, pointing out how 20th century vaccines eradicated some of the world’s worst diseases. “But some people do not buy into that,” he said, “because they did a Google search and Jenny McCarthy popped up and she had clothes on, so they listened to what she had to say and decided not to vaccinate their kids!”

To underline this point, the “Kimmel” show recruited a group of real doctors (such as the one in the image, above) to participate in an impassioned parody PSA that was seen on the show Thursday night. In the video, the doctors grew gradually more upset at the thought of parents declining to have their children vaccinated.

The video is a stellar example of how comedy can be used to get a point across about a serious subject.