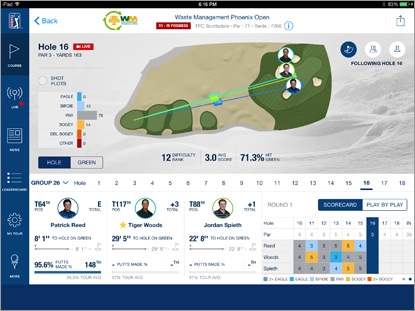 The whispering color commentary of golf broadcasters remains one of my favorite silly conceits of the genre. And then there are the camera pans skyward to follow a ball lost in the white. The entire aesthetic of golf coverage is at war with itself, struggling at once to convey the bucolic relaxation of moneyed sport and still cater to the basic necessities of televised drama. Wringing tension from this game is a challenge. They try oh so hard to keep it moving, using graphic overlays, 3D course fly-throughs and that relentless cutting from hole to hole.

And so the appearance of the new PGA tour iPad app seems like an interesting second-screen play. Just as second-screen apps are falling from favor, this is one that has a great (if unspoken) rationale: an antidote to the tediousness of the broadcast itself. While most other second-screen apps suffer from interrupting the flow of the main screen, with golf coverage there is a pretty low risk of missing something important while you fiddle with an app.

Kidding aside, I may have to watch this weekend’s World Golf Championship-Cadillac Championship just to play with the new app. Built with Omnigon and agency POSSIBLE, the iPad app incorporates live video, player tracking, real-time monitoring by each hole, and even predictive modeling. It's clearly aimed at the golf geek who wishes golf we more like baseball or football. Geeks can monitor the full course to see where the leaders are at any time, track every shot and scoring from every location.This is like Strato-o-matic Baseball meets golf.

As it first emerged several years ago, second-screening was a wet dream of the marketing industry. Knowing that smartphones and tablets were ever-ready while people watched TV, marketers fantasied that those devices could somehow be harnessed to serve the interests of broadcasters and brands. The problem was, most of these apps were distracting and usually needed some kind of tending that most users resented. The gusher of social media posts or programmed pop-up “enhancements” of something happening on screen seemed oppressive rather than enriching.

Still, we know that social media interactivity spikes for some shows, that people take to Twitter and Facebook for event television. But people generally want to be in control of their second-screening in ways not conducive to dedicated apps.

And yet second-screening seems to occur in inverse proportion to the level of our engagement in the show itself. Reality programming always fared well in social media in part because people love to take sides and root or boo the faux-celebs. Too, reality shows are often repetitive, padded with empty drama, and easily monitored in background -- which leaves loads of time for checking in with a personal device. Scripted programming, which is dense with content, generally does not get the same level of simultaneous social media interactivity.

Given that model, the new PGA Tour app should be a godsend to those hearty at-home golf spectators who need something to do while they wait for a bunch of dudes in bad slacks to stop circling the ball and make a shot.