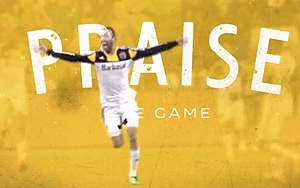 And there you have a nice syllogism for a luxury auto marketer. No surprise that Audi, therefore, which already has a global soccer program including sponsorships with Real Madrid and FC Bayern Munich — which it has sponsored for 12 years — has signed a deal with MLS to be Official Automotive Partner. As part of the multi-year deal, Audi becomes the presenting sponsor of the MLS Cup Playoffs.

According to a release on the partnership, MLS is also making big changes starting with the 20th MLS season kicking off Friday night with LA Galaxy versus Chicago Fire: there will be a new-look crest, two new expansion clubs, new star players, and new media partners. MLS says there will also be a new game of the week broadcast Friday evenings on UniMás, and a doubleheader every Sunday on ESPN2 and Fox Sports 1.

For its part, Audi gets field-level signage during nationally televised MLS broadcasts. Audi says it will also air MLS-themed television commercials during nationally televised games on ESPN, Fox and Univision, including the MLS All-Star Game, MLS Cup Playoffs and MLS Cup. To support that, the company is launching a soccer-specific ad, via AOR Venables, Bell & Partners, that will be updated throughout the season with footage of key moments on the pitch and fan footage "captured in stadiums around the country."

Audi has been ramping up its soccer marketing in the U.S. in the last couple of years. The automaker brought FC Bayern Munich and Club Deportivo Guadalajara to Red Bull Arena in New Jersey last year for a friendly match. That game sold out. During the FIFA World Cup last year Audi ran an installation in New York in which Audi A8 sedans in stacked shipping containers flashed scores in real-time LED style using the cars‘ headlamps. The automaker also has partnerships with the Seattle Sounders FC and Portland Timbers FC, through dealer group relationships.