Changes Mulled At MSNBC As Audience Yawns, Then Disappears 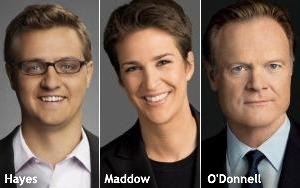 Another day, another story about a pending shakeup at MSNBC.

This one comes to us compliments of Politico, which reported Thursday that MSNBC management has apparently taken a hard look at the network’s falling ratings and are realizing they have a problem -- for the umpteenth time.

It’s easy to imagine that Pepto-Bismol is the most popular beverage at MSNBC, particularly when the ratings come out.

To put it as simply as possible, in the three-way competition in cable news (the competitors being Fox News Channel and CNN), MSNBC is in freefall.

The problem of declining viewership is not exactly new for MSNBC. These stories about its woes are written every couple of months. What’s most notable about the stories is that time after time, they tell the same tale: MSNBC’s ratings are declining with no end in sight.

They also usually point out the most glaring weaknesses in MSNBC’s program lineup. This time it’s “Chris Hayes.” Last time, it was “Ronan Farrow Daily,” the afternoon show hosted by the wholly inexperienced blue-eyed son of Mia Farrow. The “Farrow” show was canceled outright in February.

The truth is, there really are no strengths in the MSNBC lineup. Or to put it another way, no personality stands out from the MSNBC roster who you might be tempted to describe as electrifying. Whenever I tune in, I’m always struck by how dour everyone is -- particularly Rachel Maddow and Lawrence O’Donnell.

They’re always complaining, always with a sour face, always preaching in a way that seems designed to make the point that they’re intellectually superior to everyone else. For some reason, I never seem to catch them in lighter moments, if such moments ever occur. The thing is, the people on MSNBC never look like they’re having any fun. It’s TV -- lighten up, people.

Now, NBC News is getting a new chief, former NBC News President Andrew Lack, who will reportedly be turning his attention to fixing MSNBC while also attempting to rein in the fallout at NBC News over the Brian Williams war-stories scandal.

Where MSNBC is concerned, it might be time to revamp the whole thing, starting with scrapping the out-dated MSNBC name (which resulted from a long-ago collaboration with Microsoft) in favor of something more straightforward such as NBC News Channel -- a 24-hour news channel that would support, and at least theoretically, enhance the NBC News brand.

They have thought about doing this for years. Wouldn’t now be the right time, before MSNBC gets even worse?