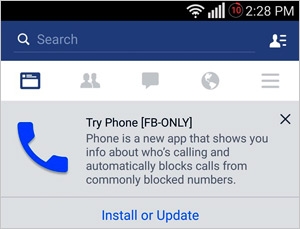 Further embedding itself into consumers’ mobile lives, Facebook appears to be preparing an app for screening and blocking phone calls.

Dubbed Phone, the app “shows you info about who’s calling and automatically blocks calls from commonly blocked numbers,” according to a message that Facebook is sending to select users.