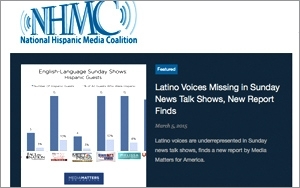 With the 2016 election season already in full swing, the Sunday morning ritual of listening to people shout over each other about politics will be a little more diverse, if the National Hispanic Leadership Agenda gets its way.

The U.S. Hispanic advocacy organization is calling for greater Hispanic representation among the panelists and pundits invited to discuss politics on the political talk shows that air every Sunday morning.

Speaking on behalf of a coalition of 39 Hispanic organizations, the NHLA issued the demand in a letter to the heads of major broadcast and cable news organizations including ABC, NBC, CBS, Fox News, CNN and MSNBC. The letter voices “deep frustration regarding the continued lack of Hispanic voices” among the guests on Sunday morning political talk shows and asks the news organizations to “take immediate action to increase Hispanic guest bookings and broaden the scope of issues that include their voices.”

Commenting on the demands contained in the letter, NHLA Chairman Hector Sanchez, who is also executive director of the Labor Council for Latin American Advancement, argued that the absence of Hispanic talking heads “results in distorting the image of our community's contributions to the life of our nation.”

National Hispanic Media Coalition President and CEO Alex Nogales opined: “It is irresponsible to exclude the perspectives of 17% of the U.S. population from the airwaves.”

The letter cited data showing that in the latter part of 2014, just 7% of guests on the main Sunday political talk shows were Hispanic.

U.S. Hispanics would appear to be ambivalent at best about their portrayal in the news media. Last year, for example, a survey of 1,492 U.S. adults by the Media Insight Project, a joint initiative by the American Press Institute, the Associated Press, and University of Chicago’s NORC Center for Public Affairs Research, found that just 33% of Hispanics surveyed said they believe the media covers their communities very accurately.