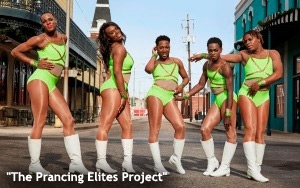 The lunchtime event at the Andaz Hotel at 41st Street and Fifth Avenue was not the usual upfront presentation for advertisers, but a briefing for journalists where all three cable channels announced new, upcoming shows.

The five entertainers were a troupe of dancers who call themselves the Prancing Elites, and they are the subject of an upcoming show on Oxygen called “The Prancing Elites Project,” premiering April 22.

Apparently, the synchronized “prancing” dance style the troupe practices has traditionally been the domain of female dance groups. So, as an all-male group of prancers, the Prancing Elites sometimes struggle to be accepted, as happened in a brief clip shown at this upfront presentation in which the prancers were denied permission to prance in a small-town parade somewhere. Let the record show that they were accepted and applauded at the Bravo-Oxygen-Esquire event.

The five were especially excited by a surprise appearance -- and lively show of support with hugs and air kisses -- from Bravo reality star NeNe Leakes of “The Real Housewives of Atlanta,” who was on hand with reality co-star Kim Zolciak to announce their new Bravo series. In their new show, called “NeNe and Kim: The Road to Riches,” the two will be seen driving across country “to discover America,” according to a press release from Bravo. Okay, America, you’ve been warned.

Among the other new shows announced by Bravo: “Apres Ski,” a reality show set in the ski resort of Whistler, British Columbia; “Fit Club,” a reality series about the lives, loves, feuds and muscles of professional trainers in New York City; and “Mother Funders,” a reality series about a parent-teacher organization in a place called Locust Grove, Ga. A clip revealed that this is one cutthroat PTO.

If there was anything innovative announced at the NBC Cable event on Monday, it was a plan in which female-skewing Oxygen and male-oriented Esquire Network would essentially be “sharing” a new reality series about the lives of standup comedians in L.A.

The plan involves splitting what might have been one show, into two shows. The one on Esquire is to be called “Comedians of L.A.,” and it will focus primarily on the professional lives of a group of real-life male comedians -- not top stars, but comics (hopefully) on the way up -- as they battle for recognition and performance bookings.

The Oxygen “half” of this concept has the working title “Living With Funny,” and it will show the comedians’ lives at home with their wives (or baby mamas, girlfriends or what have you) and their children.

It’s an interesting concept because it seems to be a novel way of controlling -- if not reducing -- production costs by, in a sense, producing two shows from material that normally would be used for one. Or, to put it another way, under this plan, producers can collect a whole bunch of footage from these comedians’ lives at work and at home and then edit the video into two different shows aimed at two different audiences. Whether this will work, I have no idea.

Some of the other new shows announced by Oxygen include: “The Hustle,” a non-scripted series from Nick Cannon about the lives of celebrity assistants in Atlanta; “Player Gets Played,” in which men who cheat on their wives or girlfriends will get some sort of comeuppance; and “Time To Quit Your Day Job,” in which young people (the all-powerful millennials) will get a chance to pitch ideas for new businesses to a panel of successful businesspeople -- another example of a current programming mini-trend exemplified by shows such as “Shark Tank” on ABC (and repurposed on CNBC) and “Restaurant Startup,” also on CNBC.

Meanwhile, Esquire’s new show announcements ranged from wine to food: “Somm,” which will take viewers inside the rigorous process by which a very select few qualify for the title of Master Sommelier; and “United States of Burgers,” a show about the search for the best hamburgers in America.

Clips for both of these were shown at Monday’s presentation and the conclusion here was that “Somm” seems designed to take us to a world we’ve never seen before and “United States of Burgers” seems destined to take us to places we’ve been to plenty of times, both on TV and off -- namely, burger joints and burger cookoffs.

Also coming to Esquire: “The Agents,” a reality-show version of the old sports-agent movie “Jerry Maguire” showing young, hot-shot sports agents in action. In a clip seen at the presentation, none of them exclaimed, “Show me the money!”