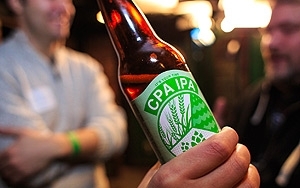 After long nights crunching numbers during tax season, there's no doubt that certified public accountants (CPAs) need a break so in an effort to raise awareness about Intuit's QuickBooks Online Accountant product - which is specifically for accountants - Intuit decided to give Rhode Island CPAs a respite by inviting them to get drunk.

Working with ad agency RPA, Intuit introduced the "Pens Down Bottoms Up" campaign that includes a partnership with Rhode Island’s Revival Brewery Co., a local microbrewery to brew and bottle a custom beer, CPA IPA, and put it on tap at happy hours across the state.

This was the first year that Intuit embarked on this type of awareness initiative and executives selected Rhode Island because it's a smaller market and also because they knew craft beer is big in the northeast.

Indeed, the campaign was designed to generate word-of-mouth, which is the most effective channel for promoting the firm's QuickBooks software since it is only for CPAs (a separate product is marketed to Small Business Owners).

Intuit hosted three events at local pubs in February with Intuit paying for the first drink among accountants who presented their business cards. Intuit employees were also present to answer any questions about its services and products.

The campaign was supported with a dedicated Web site, press in local newspapers and coverage across industry blogs. Afterward, Intuit created a video that can be viewed here.

Looking forward, Intuit is considering other markets in the future, presumably in time for next year's tax season.