In what could be the first material sign that even network prime-time TV is not immune from the physical laws of a rapidly expanding media universe, the average cost of broadcast prime-time inventory has eroded for the first time since the recession. While the rollback is small -- the average prime-time cost-per-thousand (CPM) of buying adults 18-49 on the broadcast networks fell 2.4% to $43.06 in 2014 -- the fact that it declined at all during a non-recessionary period may signal that even the most premium advertising inventory has hit the wall on Madison Avenue.

“The numbers we’re looking at don't represent a significant decline, but it’s rare to see it go down at all,” notes Neil Klar, the founder and CEO of SQAD, who has been tracking TV advertising costs for Madison Avenue for decades.

Klar, who provided a snapshot of recent CPM trending for network prime-time, online video and online display advertising over the past several years, noted that the price for all classes of “converged” media are trending downward, and said “it’s hard to say why it happened.”

That said, he cited several factors that likely are contributing to the reset of premium advertising costs, mainly the rampant proliferation of media options, the shift toward a “convergence” way of planning and buying TV and digital media, and the increasing role of programmatic media-buying, which is unlocking vast amounts of lower-priced inventory for advertisers to target their audiences -- often more precisely, efficiently and for lower costs than conventional methods of buying directly from media sellers.

In the long run Klar believes -- as many others do -- that programmatic will put upward pricing pressure on all forms of advertising inventory as buyers and sellers reset market values around the most precisely targeted segments of the inventory they trade, but in the short-run, SQAD’s trending data indicates there has been a halt to media inflation.

While the decline of network prime-time CPMs isn’t significant, the SQAD data also shows that digital advertising inventory is also deflating, including premium online video advertising, which has been seen as scarce and in high demand.

Other premium media are not immune from this trend either. The SQAD data shows that the average cable network prime-time CPM -- the next most valuable television inventory after broadcast prime-time -- also eroded in 2014, falling 3.3% to an average of $15.11 in 2014 from $15.63 in 2013.

But the rollback of prime-time broadcast network CPMs is especially noteworthy, says Klar, because historically it appeared to have inelastic demand from advertisers, despite the rampant erosion of prime-time audience deliver. Even as the average network TV rating has declined over the past 20-plus years, the average CPM has risen as the broadcast networks adjusted their prices -- and advertisers’ costs -- upwards, based largely on the assumption that network prime-time inventory was growing increasingly scarce and precious amid the hyper-fragmentation of the media marketplace.

The principle suggested that network prime-time inventory was precious because it was not interchangeable with other forms of advertising -- that it delivered a bigger bang for an increasingly inflationary buck. But Klar says many big network TV advertisers are rushing toward digital media -- especially online video -- and likely see network prime-time as being more interchangeable and replaceable in their media mixes. 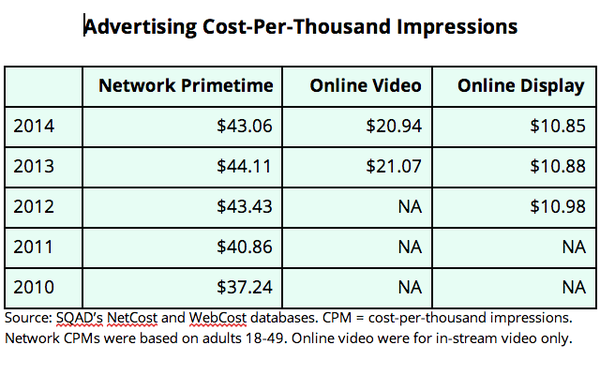