Real-time Video Is Off To The Races

“Pulp Fiction” had many great scenes between Jules and Vincent in Quentin Tarantino’s classic film. In the above scene, Vincent, played by Travolta, talks about being in the red (that red part of the tachometer on your dashboard that you never get to), the danger zone.

The past few weeks, the race for dominance in the real-time video feed space resembles a couple of race cars in the red zone — full acceleration mode. I’m referring to Meerkat and Periscope. Both of these apps enable real-time streaming broadcasts from your iPhone, for now, (sorry Android users) to a captive audience around town or around the world. Much the same way we use Twitter to instantly broadcast life moments or whatever you like, Meerkat and Periscope take the instant broadcast from 140 characters to a live, streaming broadcast. Now it’s not about how many followers you have, it’s how many followers are on your live stream — right now! 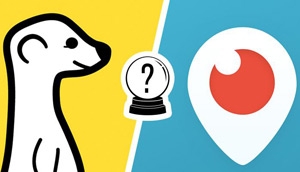 Meerkat popped up to the market, launching on Feb. 27 and on its initial weekend had over 8,000 users trying out the service and roughly 3,000 video streams. From there, Meerkat was off to the races, picking up lots of mentions on Twitter, across the social graph and landing a lot of tech press attention as the shiny new thing. If you were following SXSW updates, you probably saw or even streamed several Meerkat streams.

While Meerkat was capturing all the spotlight, another video streaming app, Periscope, was 10 feet from stardom and getting ready to launch. Periscope had been in private beta for a while and had already been acquired by Twitter in January. Two weeks after Meerkat launched, Twitter pulled back the curtain on Periscope and it launched. And with that launch, the race to acquire users between these two apps has been in full throttle.

Meerkat and Periscope work in much the same way. The biggest difference between the apps is that Meerkat “likes” and comments show up in your Twitter profile, while Periscope keeps the engagement within the app.

As a marketer, why should you care about this?  Because these are two fast-moving and fast-growing platforms that will most likely develop into mainstay platforms for engaging with your audience — much the same way Snapchat has done over the past couple of years. My hunch is that Meerkat and Periscope will grow users/audience faster than Snapchat did and advertising solutions will quickly follow. In fact, earlier this week on Tuesday, Madonna premiered her new music video, “Ghosttown,” on Meerkat.

Unfortunately for Meerkat, the premiere was a disaster with the video failing. Congrats to Meerkat for snagging Madonna and taking a gamble on crashing their service with a flash crowd. Twitter still has flash crowds that take down the service! And perhaps just as important as the Madonna premiere was Meerkat premiering their deep link within the video that delivered audiences to buy Madonna’s album on iTunes.  While many apps are just getting commerce built into their apps, Meerkat has it weeks after launch.

At the moment, Meerkat seems to be leading the real-time streaming race. Of course, time will tell. Marketers should take notes at what rapid product development looks like and, as always, start experimenting as early and often as possible.