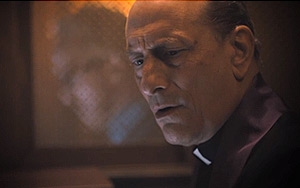 Even the most moral and straight-laced can’t resist the siren call of unlimited wireless data. Boost Mobile, for one, has no problem with that.

In a new series of short videos viewable on social media, Boost Mobile is celebrating the temptation of wireless data without the shame. “At Boost Mobile, we offer unlimited plans with lots of data options making it appropriate for you to use your phone even in the most inappropriate places,” Peiti Feng, director of brand strategy and marketing communication for Boost and Virgin Mobile at Sprint (which owns both brands), tells Marketing Daily. “Data is anything but polite, and you shouldn't be either.”

The idea to encourage people to “snap, like, retweet and share” (as Feng puts it) is illustrated in a few minute-long videos showing the temptation of data. In one video, a priest begins to hear a confession that begins with very benign sins (“I ate a baby corn from the salad bar without paying for it,” for instance.) After a moment, the priest’s phone lights up with an alluring temptation: “The Derby’s about to begin. Data knows how much you like the ponies.” As the priest tries to ignore the phone, the taunts become more pronounced, including the bugle call for horses to their starting gates. The priest eventually gives in to streaming, just as the parishioner alludes to knowing what happened to a group of hikers. The spot concludes with the line, “Come to Data.” (Another video features a man tempted to check his phone while standing at a urinal next to his coworker.)

“We launched ‘Come to Data’ in January this year to introduce Boost as the best deal in prepaid wireless and to educate consumers that we are more than talk and text,” Feng says. “Playing off the phrase ‘come to daddy,’ we personify Data as an all-knowing enabler that encourages you to give into the urge to pull out your phone.”