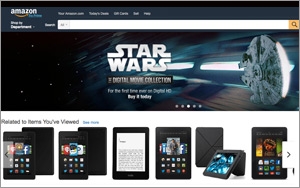 Where do you start when searching for products to buy online?

Raymond James' equity research arm recently conducted an online survey of about 500 consumers to gauge their use and outlook of Internet applications, digital media, and Web sites. Some 28% of respondents use Amazon Prime and plan to keep it, up from 24% in December

A Forrester Research study released in 2012 found that 30% of online shoppers research a product on Amazon before they purchase it. The study, titled Why Amazon Matters Now More Than Ever, analyzed Amazon’s strengths and weaknesses as a search engine.

While Amazon is certainly gaining a following on desktops, 86% of mobile users in the survey prefer to use search engines like Google when searching for a product and service. The percentages are flat compared with the December survey.

Consumers surveyed said they use Google and Yelp most often when searching for descriptions and reviews about local stores. Some 67% of consumers prefer to use Google when researching local stores, down from 69% in December. Yelp took 39% -- down from 42% -- followed by TripAdvisor at 23%, compared with 18%, respectively, for December.

The findings suggest that consumers are using Yelp more. Some 53% of respondents said they use Yelp. Out of these, 25% indicate they increased their use in the last 12 months, 12% decreased usage, and 62% maintained their usage level.