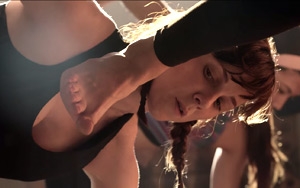 Nike is rolling out its biggest women’s campaign ever, ditching its elite-athlete vibe to make room for ordinary slackers — women who can’t finish the race, have Spin-class anxiety, and always wear sarcasm to yoga. Themed “Better for it,” the campaign is filled with a cast of self-deprecating characters that might have wandered out of a Dove or Pantene video. (Except Nike’s wanna-be athletes have a sense of humor. See the spot here.)

Experts say the effort should help the Beaverton, Ore.-based company in its scramble to reach the fast-moving women’s market, a growing segment that is increasingly as much about fashion and lifestyle as it is about performance. As a result, Nike — where sales gains of women’s apparel are already lapping men’s — finds itself competing as much against upstart girly brands like Lululemon and Sweaty Betty as it is against the boys club of Under Armour or Reebok.

The ads, created by Wieden + Kennedy, congratulate women for setting humbler (but still admirable) goals, like completing a half-marathon, finally kicking up into a handstand, or dead-lifting their body weight.

While staying true to the over-arching “Just Do It” Nike mantra, the effort is aimed at an audience “that is much more fashion driven and brand marketing driven then focused on performance,” says Sam Poser, an analyst who follows the category for SterneAgee.

He points out that Under Armour has also stepped up its effort in order to win over this less-athletic customer. “Women are much more likely to wear yoga pants when they go out shopping than they were five years ago, and when they do, they’re probably not wearing, let’s say, Bass loafers. So that creates opportunities to sell more sneakers, as well. The big question is 'How do we appeal to her?’ And, given the advent of brands like Lululemon, everybody is trying to figure it out.”

Activewear, in fact, is one of the few bright spots in the apparel world. In its most recent report, NPD says activewear sales reached $33.7 billion, or 16% of the total $206.3 billion market. But while overall apparel sales gained just 1%, activewear increased 7%. And all those gains stemmed from clothes worn everyday or to school; activewear use for athletic use actually declined.

“There’s a lot of growth potential for Nike in this lifestyle category,” says Amit Bhattacharjee, visiting assistant professor of marketing at Dartmouth’s Tuck School of Business, “and it’s still an emerging market.”

While he thinks the “Better for it” line is “kind of weird,” he believes the ads will resonate with the young women Nike is trying to woo. And since the message is close enough to its heritage, it’s not likely to alienate more hard-core women athletes.

“They ads are funny and relatable. Everyone has these doubts and insecurities in their interior monologue,” he tells Marketing Daily. And without being condescending, he says they hit on a key insight that resonates with the less-than-motivated masses who want to want to exercise, but can’t quite get there.

“People are always energized at the start of an exercise program,” he says. “That’s why people joke about going to the gym in January. But the struggles seem hardest at the middle, and this addresses the that struggle.”