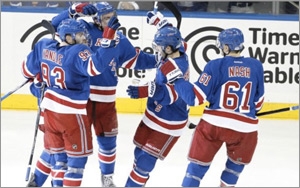 Hockey fans don't necessarily have to buy a ticket to the Garden to have some interaction with the Rangers NHL team. They definitely don't have to if they want to interact with brands that are involved in the team and/or the Garden.

That’s because the The New York Rangers are in the Stanley Cup Playoffs, and the team is celebrating with another year of its grassroots/experiential program, RangersTown Hockey House presented by Chase. This year the exhibition kicked off on Thursday outside of Madison Square Garden. During the course of the Rangers playoff run, there will be free indoor hockey and entertainment in a 10,000-square-foot space. The program includes visits by Rangers alumni, interactive hockey-themed attractions and chances to win free stuff.

A number of consumer brands are activating in the tent, and some of the events at the space will be broadcast by the MSG Network, including during the “Visa Rangers Game Night” pre-game show, which happens for every Rangers playoff game on the network. The activations include “Blueshirts Live,” a Time Warner Cable-presented hockey analysis, with Q&A sessions with Rangers players, and the Chase Locker Room, where visitors get a key that they can use to try their luck at a bank of lockers. If they open the locker, they get the prize inside.

Coke Zero is sponsoring a Green Screen Photo Experience, a social media platform; and Party City is also doing a social photo program where people can upload photos of themselves sitting on what looks like the Rangers bench during game action.

Then there are brand-sponsored interactive hockey games like Delta Air Lines’ “Accuracy Challenge” that has a regulation-size net and pucks, and a goalie. Lexus is doing a program that invites people to be a virtual version of goalie Henrik Lundqvist and face digital shots in the NHL.

Utilities provider Major Energy is letting visitors to the event become MSG Networks hosts Sam Rosen and Joe Micheletti, and do Rangers Play-by-Play in a “You Make the Call” experience. Celebrity Cruises will have roaming brand ambassadors and Sheraton New York will do a hologram video that, per the company, creates the illusion of life-size holograms that fans may view and interact with, then share the resulting video or photo via social media.