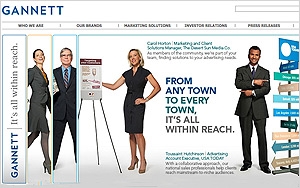 Broadcasting revenue climbed to $396.8 million during the period -- with a 26% rise in retransmission revenues to $110.2 million.

But core broadcasting local and national advertising sank 2% during the period to $253.1 million, with political advertising nearly 80% lower to $2.1 million.

A year before in the first quarter, Gannett benefited from a combined $51 million in Winter Olympics and political advertising.

Digital advertising for Gannett’s broadcasting business grew 11.2% -- and up 85.1% company-wide to $332.7 million, coming from its CareerBuilder.com and Cars.com business. The gain resulted largely from Gannett’s 73% acquisition of Cars.com that it didn’t own.

Gannett’s publishing revenues were down 8.8% to $768.2 million as a result of softness in display advertising. Advertising was 11.3% lower to $444.4 million in the period.

On the same day of its first-quarter earnings release, Gannett says its new publicly trade broadcasting/digital company, to be spun off later this year, will be called “Tegna.”

Tegna is a loose anagram of “Gannett.” Gracia Martore, president/CEO of Gannett, stated: “Tegna is a nod to the more than 100 year-old history of Gannett." Tegna will operate 46 stations Gannett currently owns or provides services to, as well as its digital unit, which includes Cars.com and CareerBuilder.com.

The Gannett name will be retained as a separate publicly-traded company for all its publishing businesses.