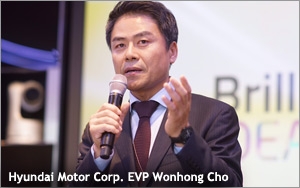 Which automakers are synonymous with fine arts? If you're in New York, Volkswagen immediately comes to mind, given the automaker’s relationship with MoMA and its sponsorship of exhibitions and retrospectives by Björk and Kraftwerk. And BMW, which has a relationship with the Guggenheim, Art Basel and Frieze Masters. And Hyundai Motor. Wait. Hyundai? Aren't  they all about FIFA and the World Cup?

Well, yes, but now, in an effort to boost their gravitas around the world and their profile as a more premium brand, they have signed a three-year partnership with Bloomberg Media around a global television program comprising a series on current artists. The program, called “Brilliant Ideas” will run on Bloomberg Television and the Group's digital channels. Each half-hour episode, of which there will be 25 over the course of the year, deals with the life and oeuvre of a current artist, starting with Grayson Perry, Cornelia Parker, Michael Joo, and Simon Denny.

Wonhong Cho, Hyundai Motor Company EVP marketing, says the program expands upon a course of action the company has been taking since 2013, when it began linking up with redoubtable institutions like MMCA (National Museum of Modern and Contemporary Art) in Seoul, the Tate Modern in London, and LACMA (Los Angeles County Museum of Art.) Marketing Daily spoke to Cho at an event on Tuesday at Bloomberg headquarters in New York.

Q: Why is Hyundai getting into the art scene?

A: We have many different art initiatives on our side. In the last decade we have been investing in the sports market to show our brand to the world, and that has been very successful. But, where we used to be  followers in the automotive industry, we are now one of the leaders. So we need to be innovative. That's how we can continue to survive and have sustainable growth. We have changed our marketing direction from just building awareness to improving familiarity, and we have also looked at society as a whole and asked ourselves what is important.

Q: What was the genesis (no pun intended) of the TV series with Bloomberg?

A: We thought about how we could expose more people to art. Yes, people visit art museums every day to experience art, but most people do not. That's why we looked for global media to have a collaboration and develop opportunities with, a way to bring art to a general audience.

A: We talked about this idea with Bloomberg, they really liked it. We have a relationship with them, and have spoken with them about this for many years. So we initiated it and Bloomberg agreed. They have been doing such great things already in art, so I think that's why they are so committed to it. And they allowed us to use our name exclusively.

Q: Is there a reason for this in terms of what it means for the brand globally?

A: We are a mass brand, but our new brand direction is "modern premium." It's delivering premium experience to our customers and potential customers beyond what you expect from a "mass" brand. And art is an exclusive experience, and its an opinion-based experience, which is another reason to choose art as a marketing pillar. In general now we are seen as both mass and premium, with vehicles like Equus and the new Genesis, which we launched last year.

Q: Does this mean Hyundai will use this new media opportunity to promote its vehicles? I can see the temptation, but think that  would be a bad idea.

A: It's a danger, I believe, since integrity is so important in this field. If we show that we are approaching this commercially, then this would not help us, as a sincere brand. So we won't make it "commercial." We could, but we won't. We will support this sincerely. If we do that the benefit goes to the mass audience, a general audience, naturally.