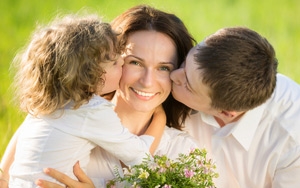 While surveys vary about just how much consumer spending will increase, it’s shaping up to be a mother of a Mother’s Day: The National Retail Federation predicts total spending to reach $21.2 billion, the highest in the 12 years it has tracked the holiday.

And this year, it’s evident people intend to broaden their interpretation of the holiday more than ever. “More and more, Mother’s Day encompasses a broader spectrum of relationships,” says Robert Passikoff, founder and president of Brand Keys, in the report.

Its survey of 6,000 finds that 87% of Americans intend to mark the day somehow, spending an average of $193, a 5% gain from last year. “It embraces everyone from moms to wives to step-moms to female relatives, and from there to female friends, as well as divorced and single-parent households. The fact that this holiday crosses all ethnic, cultural, and religious boundaries makes it a real opportunity for retailers.”

The Brand Keys research reports that consumers are leaning toward such traditional gifts as cards, meals (brunch or dinner), flowers, spa services, jewelry, and clothing.

The NRF survey, conducted by Prosper Insights & Analytics with more than 6,200 adults, found similar results. About 80% say they will buy Mom a greeting card, and 67% plan to buy flowers. And like Brand Keys, it’s predicting a surge in maternal jewelry gifts, with 34% planning to buy Mom bling, up from 31% last year. That could amount to $4.3 billion in jewelry sales, also a record for the survey.

The NRF reports that online shoppers intend to spend more, about $252 on average.

IBISWorld also released its forecast, calling for a gain of about 3.8%, or $169.21 per family. It predicts the biggest gains will be in electronics, including smart phones and tablets, dining out, and jewelry.