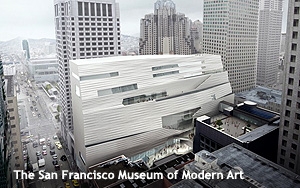 Now, SFMOMA has named San Francisco-based Chemistry Club its agency of record to create the campaign for the museum's reopening in 2016.

Chemistry Club will work with SFMOMA’s Marketing Manager, Linda Butler to create an advertising strategy and corresponding campaign to reintroduce the museum to the public, which will be heavily inspired in part by the museum’s new building design. The agency will also manage media planning and buying, emphasizing the use of digital tactics to reach members and visitors, and to introduce the museum to a younger, less arts-focused target.

This campaign is expected to feature outdoor, digital and social content, experiential and print executions.

“The museum’s transformation is not only to the building itself, but to the entire experience of what it means to visit a museum,” said Linda Butler, Marketing Manager, SFMOMA. “This opens up SFMOMA to many more people who might not relate to a traditional museum experience.” The campaign is expected to feature outdoor, digital and social content, as well as experiential and print executions.

Chemistry Club won the account after a formal review. Previously SFMOMA’s account had been handled by other San Francisco-based firms. Butler, Shine, Stern & Partners (BSSP), for instance, developed its 75th anniversary campaign in 2010.

Closed since 2013, this 235,000-square-foot expansion - designed by architectural shop Snøhetta - will join the existing Mario Botta-designed building with a new addition spanning from Minna to Howard Streets. While the museum is temporarily closed, the organization is hosting SFMOMA On the Go, pop-up shops that appear at various Bay Area locations.