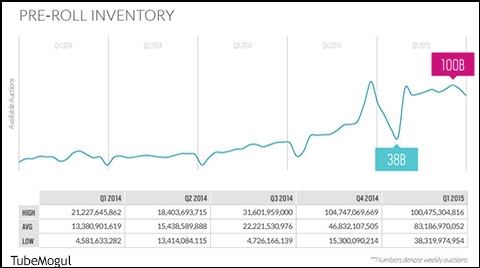 TubeMogul had access to an average of 83.1 billion pre-roll video ads per week last quarter, up from 46.8 billion the quarter before, and up from 13 billion during the first quarter of 2014. “Even the slowest week in Q1 2015 showed more volume than the biggest week a year ago,” writes TubeMogul in its quarterly report. “This growth is due more to new inventory sources coming online than increased video viewing.” The amount of pre-roll video inventory available for programmatic has risen over 500% year-over-year.

However, this jump was not nearly as stark as it had been in previous quarters. For example, the amount of inventory available for programatic direct buying through TubeMogul increased from 16 million to 41 million between the third and fourth quarters of 2014.

In the U.S. the viewability of video ads bought via programmatic exchanges slightly increased quarter-over-quarter, from 32% to 34%.

“Around the world we see rates that are a little bit higher,” commented Taylor Schreiner, VP of research at TubeMogul. “If you look at this graph from around the world, we’re generally seeing a march up and to the right. In the UK, viewability was 50% last quarter.”

The takeaway, Schreiner asserts, is that higher viewability rates are possible and that the industry is moving -- albeit slowly -- in the right direction.