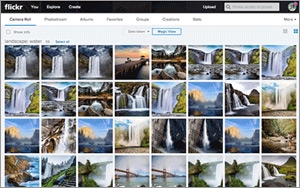 Determined to return Flickr to its former glory, Yahoo just relaunched the photo-sharing platform with a focus on mobile and archival management.

“Now you can easily and effectively upload, view, organize, edit and share your lifetime of photos and videos across desktop and mobile,” Tim Miller, head of engineering at Flickr, explains in a new blog post.

A new Uploadr feature invites users to upload up to half a million photos, while an Auto-Uploadr feature will let users automatically sync photos and videos across multiple devices.

Built with Yahoo’s own image recognition technology, a new Magic View feature will identify the content of users’ photos, and organize them across more than 60 categories — from landscapes and panoramas to animals and screenshots.

Despite accusations of neglect, Yahoo has invested in Flickr under the reign of CEO Marissa Mayer. In 2013, it gave users a full terabyte of free storage, along with a redesigned mobile app, fresh editing features, and a broad set of options for embedding images on other Web pages.

While Flickr has failed to generate the buzz of Instragram and other photo-sharing services, its network remains massive. Indeed, the platform is made up of about 11 billion photos.