Honda Brings Back 'The Fastest Seat In Sports' For IndyCar 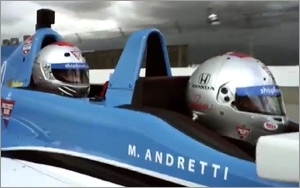 Honda Performance Development has several Formula super-cars in this IndyCar race season, and the field is bearing down on the Indy 500 on May 24, the most iconic race in the series.

And now you can take one of Honda's open-wheel racers for a drive around your neighborhood, at 200 mph. You won't however, impress your friends, because it's a virtual drive on Google Maps Street View. It's part of Honda's yearly program to celebrate the iconic open-wheel super-car race.

Yes, for the fourth year Honda is back with its “Fastest Seat in Sports” campaign, including a sweepstakes, new advertising and the interactive experience, the IndyCar Speed Simulator, at FastestSeat.com. Once users have entered an address, Google Maps forms a custom racetrack, and gives the user a virtual street-view drive from the driver's seat the Indy Car.

The automaker is also back with its tandem two-seat IndyCar racer, and “Fastest Seat in Sports” promotion that lets people throw their hat in for a chance to ride in the tandem car with Mario Andretti at the wheel. After people play the simulator game, they are prompted to enter the sweepstakes. Participants can also win a trip to next year’s Indianapolis 500 or one of 12 races this season.

Ernie Kelsey, manager of Honda regional marketing, tells Marketing Daily that the new simulator and the new TV ad creative were inspired by the fact that Honda has new team livery. The ad stars Andretti and actor Fred Savage, whom the automaker tapped last fall to be the new voice of Honda. The campaign was developed by Honda’s agency of record, Santa Monica-based RPA.

The ad actually plays with the idea of what Savage has to go through to be the voice of the brand. As he and Andretti stand on the tarmac in front of the race car, Savage holds a script aloft and looks at someone offscreen. “You want me to just read this, while he's driving … fast?” Honda has been running the spot in race markets since the season began.

“Racing is in our DNA; it's who we are.  And there's no other experience like riding in a two-seater around the [Indy] track. Except maybe throwing out the first pitch of a game,” says Kelsey, adding that the goal is to reach the auto racing enthusiast who also happens to be in market for a car. Honda will also have an experiential “fan village” exhibit  at 11 of the 15 IndyCar races in the U.S. this year, and will have the two-seater at 14 of this year’s races.