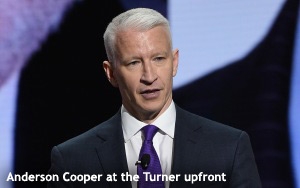 CNN is positioning itself this upfront season as a news channel on the rise, but one that is going beyond news programming to broaden its audience.

To deliver this message at the Turner upfront Wednesday in New York, the company brought out the newsman who more than anyone else is the face of CNN these days: Anderson Cooper.

It was the first time CNN was included among the Turner-owned networks -- most of them entertainment-oriented -- in the company’s annual upfront presentation.

Cooper was faced with the challenge of articulating CNN’s position as a channel unalterably committed to news, while at the same time emphasizing and promoting CNN’s growing involvement in the development and production of non-news programming.

While these two facets of CNN’s programming might seem at first glance to be at odds with each other, the script written for Cooper to deliver at the upfront strove to give the impression that the two are compatible.

“Today, CNN is about breaking news -- it’s about big events and investigative journalism,” Cooper told his audience. “But we’re also about original series, documentaries and feature-length films that have broadened our audience.”

Having said that, he re-emphasized CNN’s commitment to news. “CNN has more hours of live news programming today than at any point in our entire history,” Cooper said, leading into a pitch for CNN’s coverage of the 2016 elections that begins this year.

“Our audience is growing this year. CNN has its largest share of the cable news audience in seven years and the next 18 months figure to be even more exciting,” Cooper said. “We are uniquely positioned to cover the 2016 presidential election,” he said, driving home the point that while competitors Fox News Channel and MSNBC cover politics from the right and the left, respectively, CNN is non-partisan. (He didn’t mention the competition by name.)

“We have the largest team of television and digital reporters anywhere without partisan slant, with presidential debates for both parties, a brand-new Sunday morning lineup and a whole new ‘CNN Politics’ digital effort,” Cooper said.

Then he returned to the non-news programming story at CNN. “CNN is no longer just about breaking news and politics,” he then said. “At the heart of all of our coverage is great storytelling.  And that’s what all of our series programming is all about.”

He was referring to the growing portfolio of CNN originals, such as “Anthony Bourdain: Parts Unknown,” “Somebody’s Gotta Do It” with Mike Rowe, “Inside Man” with Morgan Spurlock and “The Hunt” with John Walsh. CNN added to the list at its upfront on Wednesday with the announcement of two new series. CNN also restated its commitment to several previously announced series.

The news ones are: “The Eighties,” a docu-series premiering next year that follows in the footsteps of two other decade docs produced by CNN – “The Sixties” and “The Seventies” (which premieres next month); and “Declassified,” a series that will tell the stories of formerly secret U.S. espionage missions whose details have been declassified by the government.

Series already in the pipeline for 2016 include “Believer,” a series in which author Reza Aslan embeds himself in various religions; and “United Shades of America” with comedian W. Kamau Bell.

CNN also announced a second-season pickup for “The Wonder List with Bill Weir” and a third-season order for “This is Life with Lisa Ling.”