Pixalate, a real-time analytics platform, on Tuesday released the latest edition of its “Global Seller Trust Index” -- an index that ranks over 400 sellers by quality of ads sold via real-time bidding (RTB), accounting for things such as inventory quality, viewability rates and fraud rates.

The updated index -- which looks at data from April 2015 -- also includes several new features, including a malware score (measuring how much malware risk there is with each individual sellers) and an entirely new section that breaks down each seller by IAB-defined verticals.

To clarify: The scores are reflective of each seller’s performance relative to peers. In other words, a score of 99 simply means they are the best performer in that category -- it does not mean that particular seller is 99% effective against malware.

In fact, Pixalate notes that “this new analysis revealed that more than 70% of sellers are exposed to malware-driven ad fraud and one in 20 Internet users were infected.” Pixalate found that Technology & Computing most susceptible to malware, as it accounted for 30% of malware traffic.

The malware scores are based on three dimensions, as measured by Pixalate’s technology: Ads served on infected user machines, ads served on domains depositing malware, and security rating of a comprehensive list of ad server domains owned and operated by sellers, per a release.

The other new twist to Pixalate’s RTB seller index is the insight it gives into each seller’s performance by vertical. Google AdExchange, OpenX and Rubicon are either first or second in every vertical, including Arts & Entertainment, Automotive, Sports, Education, Travel, Food & Drink and more.

Sovrn and GourmetAds are the only other two sellers to crack the top three in respective verticals: Gourmet Ads, fittingly, in the Food & Drink category, and sovrn in Hobbies & Interests.

The full index can be found here. 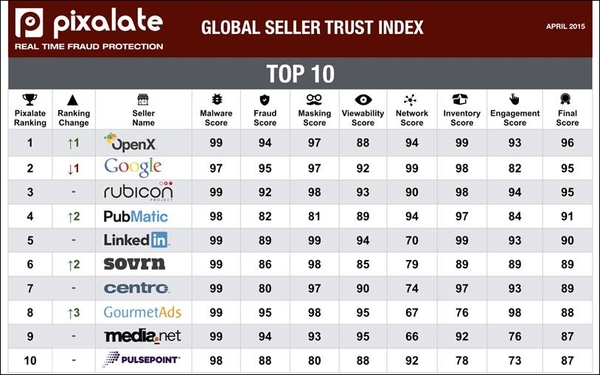