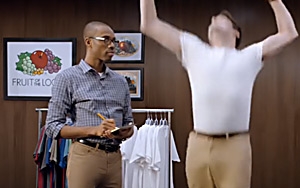 Fruit of the Loom, of all brands, is going to be at the ESPN X Games. No --  there's no BMX cycling in undies, or lingerie skating. The company is introducing a men’s classic crew and V-neck undershirt designed to cure an issue that has plagued half of humanity since the advent of the undershirt: the ride-up.

The company says that in response to consumer feedback suggesting that traditional cotton undershirts don’t always stay tucked, the updated Crew and V-Neck have been redesigned so that doesn't happen. The new shirt is also designed to eliminate bunching of the shirt around the waist, which makes the wearer appear to have a spare tire, and so-called "batwings" from stretched armholes.

The effort includes a TV and digital campaign featuring a spot in which a guy wearing the T is being tested for how well the shirt stays tucked in. As researchers watch, he's asked to pretend to do things like do a plumbing job, catch an elf, do the robot dance, and act like “Walker, Texas Ranger” (performing martial arts.) The effort includes a refocus on the shirt on its web site, with humorous photos of people doing crazy physical things to test the shirt.

At the X Games in Austin, Texas next week, famed motorcycle racer Travis Pastrana will show up on June 6 to ride a mechanical bull with the shirt to prove it stays tucked in -- even under those conditions, according to the company.

The company will also let attendees ride the mechanical bull while wearing the undershirt with a leaderboard keeping track of the top riders for the weekend. People can also get a free-sample voucher when they buy from a retailer at the X Games. The company is launching the tee at $13.99 for a pack of six at Wal-Mart and Target.