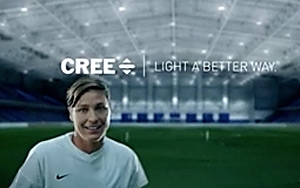 To coincide with the start of the FIFA Women’s World Cup games, LED light brand Cree is teaming with advertising agency Baldwin& to launch a soccer-themed campaign.

This month’s World Cup is seen as an opportunity to tap into a key cultural moment in sports, say agency executives.

The effort features Abby Wambach, the captain of the World Cup U.S. Women's Soccer Team as she plays in a darkened, empty stadium. The video's only dialogue is "check this out" as she kicks six soccer balls from more than a half a soccer field's length away and hits six fluorescent, metal halide, and incandescent bulbs.

Then, she flicks on the stadium's Cree-installed LED lights with the printed message "Time to end bad lighting. Cree. Light a better way." Here is a link to the video.

The :90 second clip appears on Cree’s Facebook page and will be supported by paid Facebook and Twitter advertising and  paid video seeding to approximately 700 to 1000 soccer-related social influencers, via social media agency TapInfluence.

The campaign will also release behind-the-scenes footage after the World Cup Finals.

Although women's soccer stars may not be as well-known as football or basketball athletes, Wambach is a well-suited spokesperson for Cree, say executives. First, sports stadiums are a significant market for the brand. After all, they need a lot of long-lasting lights. Second, sports-related media has typically performed extremely well for the company and serves as a brand differentiator.

Also, the World Cup provides an elevated platform without the high cost associated with nabbing a high profile athlete. Lastly, Wambach and soccer reach across large demographics. This campaign's target audience is defined as “those open to the idea of using LEDlighting, both B2B and B2C.”

Baldwin& and Cree have worked together since 2013. Cree makes LED fixtures and bulbs, LED lighting and semiconductor solutions for wireless and power applications. The company is heavily investing in establishing brand recognition. Its advertising budget was $26.6 million, $18.2 million, and $9.7 million for 2014, 2013, and 2012, respectively, according to company financial records.

Baldwin& is a full-service agency based in Raleigh, N.C. with clients including Burt’s Bees, Habitat for Humanity and Ponysaurus.