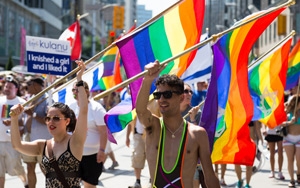 Amazon jumped six places from last year to take the top spot in YouGov BrandIndex’s new ranking of the brands that are best-perceived among LGBT Americans.

In its most recent Corporate Equality Index Rating, an assessment of LGBT policies in the workplace, the Human Rights Campaign gave Amazon a score of 90 out of a possible 100 points. In March, Amazon, along with some of the other brands on this year’s top 10 ranking, also filed an Amicus brief with the Supreme Court, supporting gay marriage.

YouGov surveyed 16,000 LGBT adults (18 and over) about all 1,400-plus brands tracked by BrandIndex, using its Buzz score, which asks respondents: “If you've heard anything about the brand in the last two weeks, through advertising, news or word of mouth, was it positive or negative?” All results were filtered for respondents who identified themselves as lesbian, gay, bisexual or transgender.

The Buzz score can range from 100 to -100, with a zero score equaling a neutral position.

Apple and its iPhone ranked second and third, respectively, this year. Both brands also were two of the biggest gainers in perception since last June.

Apple CEO Tim Cook authored a headline-making Bloomberg Businessweek op-ed about life as a gay man. In March, he wrote another one for The Washington Post, condemning “religious freedom” laws being voted on in Indiana and Arkansas.

iPhone, Google and HBO are returning to the top 10, after being absent a year ago. Subway, which was #16 last year, is making its debut in the top 10.

Chevrolet has been notable in featuring same sex families in its ads since the Sochi Winter Olympics. A year ago, Allstate released a short animated music video as part of its LGBT “Out Holding Hands” campaign.

Brands that fell out of the top 10 this year are Costco, Trader Joe’s, YouTube and Ace Hardware.