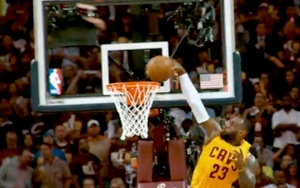 ABC’s NBA Finals continue to easily outperform results of a year ago -- as well as offering up the highest average viewership in nearly a decade and a half.

Game three between Golden State Warriors and the Cleveland Cavaliers earned a big Nielsen 18.8 million viewers -- up 25% from last year’s 14.8 million viewers. Among key 18-49 viewers, results rose 24% versus a year ago to 7.3 rating/25.

So far, the 2015 NBA Finals are posting the best results in 14 years, since 2001, when the Los Angeles Lakers played the Philadelphia 76ers.

Why the high numbers? Analysts point to a series including LeBron James of the Cavaliers, who has won four Most Valuable Player awards and has now been in five straight NBA Finals, as well as Stephen Curry of the Warriors, the current NBA MVP.

Also, there has been the unexpected strong performance of the underdog Cavaliers, including little known player Matthew Dellavedova, after losing key players to injuries.