Film Noir Festival Proves Once Again How Much We Need TCM 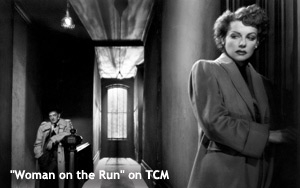 If various references on the subject of film noir agree on anything, it’s that the qualifications for a movie’s inclusion in this category are subject to debate.

For some, a movie requires the presence of a lone male protagonist to qualify as a film noir -- a detective or some other crusader who lives by his own righteous code of ethics in a hopelessly corrupt world (“The Maltese Falcon,” “Laura,” “The Big Sleep”).

For others, the lead character, male or female, doesn’t have to be ethical or crusading at all, just an otherwise ordinary person who is susceptible to the temptations of the corrupt world -- often represented by a femme fatale, but any antisocial figure exerting a negative influence will do (“Gun Crazy,” “Strangers on a Train”).

For others, true film noirs (a French term that literally means “black films”) are identified by various characteristics such as the way the movies look and the nature of the stories they tell. For purists (or semi-purists), film noir encompasses only black-and-white movies made roughly from the 1930s through most of the 1950s (though some don’t countenance including movies from the 1930s at all). Others are more flexible; they don’t mind including a handful of color films made after the 1950s in the film noir canon (“Point Blank,” from 1967, for example).

Most film noir fans would probably agree that a true film noir would have to be a crime story, most often featuring one or more murders (take your pick of a hundred film noir titles) and/or an elaborate “caper” such as a robbery (“The Asphalt Jungle,” “Criss Cross”). Leading characters caught up in and destroyed by modern technology are also a common feature of film noirs (“White Heat,” “DOA”).

Why bring all this up? Because all of the aforementioned films are among the 121 movies comprising the annual “Summer of Darkness” film noir festival on Turner Classic Movies. This year’s festival started last Friday (June 5), anchored by two Ann Sheridan movies, “Nora Prentiss” and “Woman on the Run.” The festival continues on Fridays through July 31.

It is one of those programming events worth mentioning every once in a while because it illustrates the importance, if not the indispensability, of Turner Classic Movies, a television channel so unique that it stands alone in its own category: A basic cable channel that carries no commercials and shows no sign that it ever will.

Once upon a time, American Movie Classics was a similar movie service -- dedicated to showcasing old movies without commercial interruption. And then it opted for commercials and eventually changed its name to AMC. Today, AMC still shows movies -- and original series such as “Mad Men” and “The Walking Dead” -- but like all of the other commercial-supported channels on basic cable that air theatricals, the movies on AMC are interminable, jammed with commercial breaks every few minutes and impossible to watch without going insane.

TCM, though, has never succumbed to the temptation to add commercials -- a temptation one would assume would be irresistible to a TV company (in this case, Time Warner), at least eventually. But nevertheless, here we are -- enjoying a commercial-free showcase for old movies on a network whose skill and dedication to presenting these movies in as pristine a fashion as possible only improves with the passage of time.

Some will be familiar, whether you’re a film noir buff or not, since they’re seen often on TCM (“The Third Man,” “The Stranger,” “The Harder They Fall” and others). But many others are seldom seen and this element of surprise has long been one of the allures of TCM: You tune in wondering what’s playing on TCM and often you become engrossed in some great old movie you never heard of before.

TCM’s noir festival seems to take little notice of the debate over what constitutes a “true” film noir. The movies on the festival’s playlist represent 66 years of cinematic history, from “M” (1931) to “L.A. Confidential” (1997). And they seem to cover all the bases, where the categorization of film noir movies is concerned.

My favorite title on the whole list: “Elevator to the Gallows” (from 1958). I’ve never heard of it, but now I have an opportunity to see it, thanks to TCM.

film, movies, tv
1 comment about " Film Noir Festival Proves Once Again How Much We Need TCM ".
Check to receive email when comments are posted.
Next story loading