The licensing business for automakers is big busine 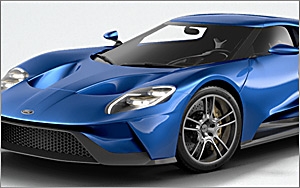 ss -- one you don't hear a lot about. But it generates big revenue, and helps carmakers build equity and awareness whether it involves branded apparel, toys, appliances, wearables, kitchenware, hardware, and pretty much anything else you can think of.

But the core, heritage products are scale model cars and trucks. Ford, which has at least $1.5 billion. is looking where those diminutive cars are heading, and it is toward a market wherein a lot of consumers have 3D printers.

The automaker is the first to let you print that scale model vehicle, at whatever size you want, presumably. The Dearborn, Mich.-based company has launched a licensing program housed at a new Web site, where consumers can download 3D-printable files of several Ford vehicles, with more to follow, designed to be printed 3D out of whatever materials work.

The program, at a new, online Ford 3D Store, currently offers printable files of F-150 Raptor, Shelby GT350R, Focus ST and Fiesta ST. Housed at  3D.Ford.com, the site is run by 3D digital imaging firm TurboSquid.com, which Ford already uses as a conduit for marketing its heritage images. TurboSquid, per Ford, created the site and handles order fulfillment. People who use the site will be able to print the vehicle or buy a 3D digital file from the 1,000 or so Ford images sold through TurboSquid.

“3D printing at home is a growing trend, and it makes sense for us to offer our customers a chance to make their own 3D Ford models,” said Mark Bentley, licensing manager, Ford global brand licensing, in a statement. “At Ford, we’re using 3D printing every day to rapidly prototype parts, and now we want to share that fun with our fans.”

Ford says the 3D-printed models are 1/32nd scale in plastic, but if you purchase the digital image instead of the scale model printed car, you can print a 3D model to any scale, from any material, include metals, sandstone, and plastics.

Of course the potential side effect of letting people have digital files for 3D printing is that they can start a cottage business for scale model Shelby's, and with a nice markup. Ford says that won't happen because people have to register at the site and sign a digital agreement saying they won't go into collectibles commerce.

Said Bentley: “We’re at the forefront of licensing 3D automotive images, and it made sense that TurboSquid help us complete that connection to the consumer.”

Ford cites Juniper research on the market potential for the sales of desktop 3D printers -- indicating that it will exceed 1 million units by 2018, from an estimated 44,000 sold annually in 2014.

According to Licensing Magazine, the 150 top global licensors, among whom Ford is was number 30 last year with $2 billion in sales, accounted for $251.8 billion in retail sales in 2013. General Motors’ brands, collectively, constituted the top licensed product revenue generator among automakers, at 15th place with $3.5 billion in sales.