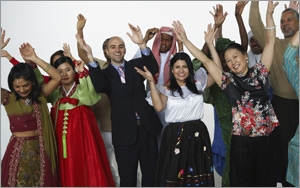 The Asian-American population is expanding fast and its spending power is growing even faster, according to a new report from Nielsen profiling this diverse group.

It’s worth noting a number of important caveats at the outset. As with “Hispanics,” the term “Asian-American” is a convenient designation for a variety of culturally distinct communities, including South Asians from the Indian subcontinent, Southeast Asians hailing from Vietnam and Thailand, as well as East Asians from China, Japan, and Korea.

There is also considerable variation within these communities. Many immigrants from southern China speak Cantonese rather than the Mandarin of northern China, while Indian immigrants may speak one of hundreds of different dialects. There is also considerable generational diversity, as first-, second- and third-generation Asian-Americans display differing levels of acculturation or tendencies to blend or move between cultures.

In keeping with their relative affluence, Asian-Americans have higher average annual expenditures per household, at $61,700 compared to $52,000 for the general population. On average, they spend more on housing, transportation, insurance, food, apparel, cellular phones service, furniture, household products, health and beauty aids, and OTC medications.

In terms of consumption choices and behaviors, Nielsen found that Asian-Americans are significantly more likely to visit warehouse club stores, accounting for 11% of their shopping trips compared to 5% for the consumer population overall. At the same time, they’re 31% more likely to spend over $200 a week at the grocery store, 31% more likely to buy organic food, and 140% more likely to buy a bottle of win worth $20 or more. Millennial Asian women tend to avoid private label (store brand) products.

Beyond their relative affluence, Nielsen highlighted a number of characteristics that make Asian-Americans an attractive target for marketers, including their high rates of adoption for new digital devices and technologies. While 77% of the total consumer population owns a smartphone, the figure rises to 87% among Asian-Americans.