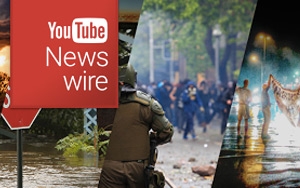 User-generated content that morphed into eyewitness-footage of current events has become one of the most interesting transformations in the evolution of YouTube. Now Google wants to use that footage to help site visitors find the most relevant clips.

On Thursday Google launched a service named YouTube Newswire to provide the most current eyewitness footage uploaded to the site on events like the Ferguson protests, earthquakes in Napal, and Charlie Hebdo attacks. In the past decade, people have watched some of the biggest and most important news stories, sharing their encounters on the video site. The company estimates more than 5 million hours of news video is watched on YouTube daily.

Google said Newswire will feature global and regional feeds that serve the most relevant videos worldwide. The service launches in partnership with Storyful, a social news agency Google worked with since protests broke out in Tahrir Square in 2011. The curated feed of the most newsworthy eyewitness videos of the day will be verified by Storyful’s team of editors and embedded from the original sources. Aside from YouTube visitors searching for information, Google hopes Newswire will become a resource for journalists to use for important news stories.

Trusting news sources comes with experience, but Google thinks it can teach YouTube Newswire journalists to verify content and become impartial observers by forming a group it calls The First Draft Coalition, a group of social media journalists who will create educational resources on how to verify eyewitness media.

Google also partnered with WITNESS to support human rights issues through the analysis of citizen video. The WITNESS Media Lab, in collaboration with innovators in the technology, advocacy and journalism fields, will produce a series of in-depth projects that focus on human rights struggles as seen from the perspective of those who live, witness, and experience them. The first project from the WITNESS Media Lab will explore the impact of bystander video in bringing about justice in police brutality cases in the United States.