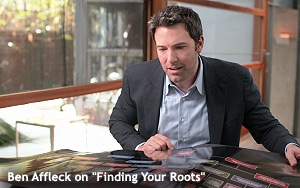 Ben Affleck’s slave-owning ancestry ran counter to the narrative that had already been pre-planned for the episode of the PBS show called “Finding Your Roots” that he appeared in last October. So this “embarrassing” revelation was excised from the show.

Affleck’s self-described embarrassment notwithstanding, this would seem to be the primary reason this edit was made on this particular episode, which was subtitled “Roots of Freedom” and whose other guests included the president of the NAACP, Ben Jealous, and Khandi Alexander, an African-American actress.

A description of the episode can still be found on the Web site PBS maintains for press releases, photos and program information. The first line promotes the episode this way: “Learn how the ancestors of Ben Affleck, Khandi Alexander and Ben Jealous fought for freedom.”

Oops. While other aspects of Affleck’s ancestry apparently fit this narrative, documentation unearthed by the show’s producers about a Georgia ancestor of Affleck’s, who probably owned seven slaves in the 1850s and ’60s, did not.

This particular storyline would run in direct opposition to the positioning of this episode in a subsequent description of the show. “These three guests’ families have long been engaged in the battle for freedom and civil rights [sarcastically insert words “except for Ben Affleck’s slave-owning ancestor” here],” said the copy written to promote this show. “But they had no idea that those principles were passed down through generations of ancestors [except, again, for Ben Affleck’s slave-owning ancestor].” You can see how this tidbit about Affleck’s family history wouldn’t work here.

To give the Affleck family its due, however, Affleck himself has long been involved in various social causes, and the PBS show was able to document other such good works on the part of some of his relatives (except for you-know-who).

“Ben Affleck’s mother was a Freedom Rider in 1964 and her roots include the 19th-century spiritualist Almon French, who attempted to heal the bereaved masses in the aftermath of the Civil War,” continued the show description, as it painted a picture of civil-rights heroics and possible martyrdom attributable to the families of all three of its guests.

Elsewhere on the show, “NAACP President Ben Jealous learns the heroic story of his great-grandfather Peter G. Morgan, a free black man who was forced to purchase his own wife and family in order to keep them safe. And actress Khandi Alexander, who never knew who her grandfather was, learns that he may have been murdered in the Jim Crow-era South.”

So now you’re wondering: Were these other stories true? Were they told in full? Or were certain things left out of their family histories too? These are fair questions to ask in the wake of the revelation that Affleck was able to get the show’s producers --  who had their own preconceived storyline to protect -- to remove any mention of his “embarrassing” slave-owning ancestry from the show.

Now that strong doubts have been established about the authenticity of the “history” being presented on this show, PBS is doing the right thing in its decision to suspend “Finding Your Roots” until the show can get its act together -- which includes adhering to the facts, whatever they might turn out to be, and including such facts, despite a subject’s dismay over what they might reveal about his or her family history.

You would think the subjects who agree to go on this show would be told in advance that aspects of their family histories might be unearthed that they might not like, and that the show has every right to air them anyway.

However, it turns out that the subjects have a say in that. Affleck seemed to admit as much in a comment he reportedly posted on his Facebook page in April. “I didn’t want any television show about my family to include a guy who owned slaves,” he wrote.

That’s understandable, actually, but it should not be his choice to make. Nor should he participate in whitewashes or cover-ups about his family history for the simple reason that nobody in their right mind would conclude that Ben Affleck secretly harbors pro-slavery sympathies (or something to that effect) now that the world knows one of his distant relatives was a slave-owner. Is this what he’s afraid of?

TLC has a similar celebrity family-history series called “Who Do You Think You Are?” And one guest, Chelsea Handler, was seen on an episode in 2013 actually traveling to Germany on a mission to learn, come what may, if one of her grandfathers, who fought on the German side in World War II, was an actual Nazi sympathizer.

The best answer the show could come up with was “maybe,” but there was no sign that Handler was unwilling to confront the truth if it turned out to be yes. She was fine with it being broadcast because she realized sensibly that no one would then turn around and accuse her of being a Nazi.

What are the lessons here? That our roots cannot be changed. And that Ben Affleck ought to lighten up.