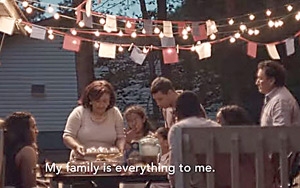 are continuing the brand's "This Is Wholesome" campaign, which celebrates all kinds of families, with a spot featuring a Dominican family that has immigrated to America to provide a better life for their kids.

The new ad, which reminds viewers of America's melting-pot roots, features voiceovers of father Arisandy Gomez, an environmental engineer, and mother Cindy, a realtor, talking about their love of family, work ethic, and pride in being Americans. ("Just because we speak Spanish at home doesn't mean that we're less Americans than anybody else," notes the father.) Footage shows them playing with their kids and celebrating the Fourth of July with their extended family — including grilling s'mores with a Honey Maid package in view.

The spot ends with screen messages noting that one in five Americans is part of an immigrant family, and wishing a happy Fourth of July to "every wholesome family."

For the holiday, consumers are being encouraged to "share their love for all families" on social media, using #MeltingPot and #ThisIsWholesome. The new video has been embedded on the brand's Facebook and Twitter pages.

Mondelez International launched "This Is Wholesome" last fall, following the success of General Mills's Cheerios' campaign featuring an interracial family. The Honey Maid campaign has to date included more than a dozen TV spots and videos (see YouTube playlist) featuring families that would once have been considered unconventional, including a single-parent family, divorced but amicable families (#notbroken), families of mixed race, a family with a punk rocker dad, and a family with same-sex parents.

The creative's common tagline: "No matter how much things [or families] change, what makes us wholesome never will."