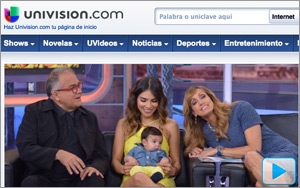 The biggest Spanish-language TV broadcaster in the U.S. is preparing to make its stock market debut. Univision filed a plan for its initial public offering with the Security and Exchange Commission, including financial disclosures detailing the company’s recent performance.

According to the SEC filing Univision stated that it plans to raise at least $100 million, although this number will probably rise. Previous reports suggested the IPO might raise a sum over $1 billion.

The offering would only involve a small fraction of the company’s equity, valuing it at as much as $20 billion, when debt is included. Most of the company’s equity will remain in the hands of its current owners, a consortium of private equity companies including Madison Dearborn Partners, Providence Equity Partners, TPG Capital and Thomas H. Lee Partners.

El Rey Network, created by director Robert Rodriguez, had revenues of $44.9 million in 2014, but posted a loss of $72.3 million. Univision owns one-fifth of El Rey. Both Fusion and El Rey target Hispanic millennials with English-language content.

Univision also updated potential investors on the outlook for its legal battle with Donald Trump. He is suing the company for $500 million for breach of contract after it abruptly ended its association with the real-estate mogul, citing his recent controversial comments about Mexican immigrants. Univision expressed confidence it will prevail in court, dismissing the lawsuit as “legally ridiculous.”