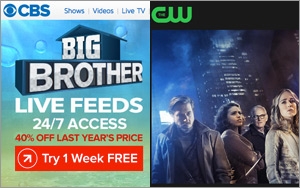 CBS and The CW -- of which CBS Corp. is a co-owner -- have completed separate long-term affiliate deals with the large TV broadcast station company Sinclair Broadcast Group.

The CBS and Sinclair deal renews station affiliation agreements in 16 markets nationwide, covering 6% of the U.S., or about 7 million households. Terms were not disclosed.

The CBS-Sinclair deal also covers affiliation with CBS All Access, the stand-alone digital platform that CBS launched earlier this year. CBS All Access has signed up affiliates representing over two-thirds of U.S. TV homes, which in addition to current season and library content (except the NFL) includes live linear TV station feeds.

CBS' deal with Sinclair covers 15 Sinclair-owned CBS affiliates, and one market -- KMEG Sioux City, Iowa -- for which Sinclair provides sales and other services.

Neither CBS or Sinclair would discuss specifics regarding retransmission fees -- fees that Sinclair and other TV stations get pay TV providers -- as part of its deal. Networks typically demand that station retransmission revenues be factored into their affiliate deals.

SNL Kagan says that by 2018, the average monthly per-subscriber retransmission fee for a TV station will be $1.53 -- higher than all but five basic cable networks.

With regard to the CBS deal, Barry Faber, EVP/general counsel of Sinclair, stated: “The new deal provides us visibility on our network programming costs, and therefore positions us to appropriately price our retransmission consent rights in our negotiations with MVPDs as we move towards fully realizing the value of the programming offered by our stations.”

Ray Hopkins, president of television networks distribution for CBS Corp., stated: “We are pleased to enter another affiliation agreement with them, and in so doing, realize the full value for the programing we will provide to their stations.”

The CW-Sinclair renewal deal covers 23 Sinclair owned and/or operated markets across the country. The CW is also renewing nine agreements with stations for which Sinclair provides sales and other services. CBS and Warner Bros. co-owned The CW.