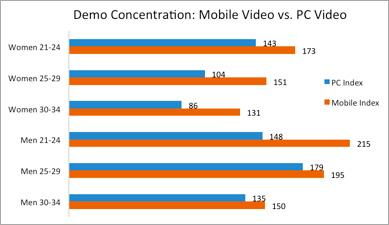 Mobile has started to fill the gaps in consumer time on the Internet in a big way.

Compared to typical days the previous month, the company saw 89% spikes July 4weekend in mobile video traffic in North America as measured by ad requests within its platform. PC traffic saw a 24% decrease as compared to the previous week. Overall, “the number of total video ad impressions doubled year-over-year (as of May 2015), while the number of mobile video impressions increased 17 times,” the study said.

There are several reasons for the enormous growth. Advertisers are exploring more multiscreen options as mobile consumption increases; mobile video shows a higher concentration of audience in each 21-34 age break for both men and women; more advanced targeting data for mobile advertisers now exists.

Videology says number of video ad impressions using advanced targeting data on their platform has increased 13 times from January 2015 to May 2015.

Schleider concludes, “Advertisers are discovering empirically that the proper allocation of mobile added to the overall mix of screens results in greater ROI.”