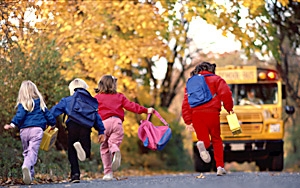 Americans have become more family orientated. Spending time with family and friends has become valuable. Enjoying the summer and spending money on high-dollar cars and boats and other recreational vehicles, and travel destinations are still on the table, but luxury items need to enhance the time spent with family and friends. Parents are thinking much earlier this summer about searching for supplies in preparation for sending their kids back to school.

Before parents go shopping in stores, they go searching online. Search interest for "back to school" already rose 12% so far this year, up from 48% last season, according to Google's data. Searches began trending higher a week earlier in 2015, compared with last year, and three weeks earlier compared with 2013.

Some 80% of back-to-school shoppers try to finish their shopping in two weeks or less, according to the data. About 70% said they would shop at three or fewer stores for their supplies, making it more important for brands and retailers.

Google's data shows a "new customer journey taking shape." If many parents have their minds made up when they set out to buy, then Google thinks marketers should hear the message as "be early and be online." To me that message says be timely in the moment, relevant, and honest to win customer loyalty, especially as mobile takes on the majority of searches.

Last summer, about 40% of back-to-school searches were done on mobile devices, and already this year, mobile share is topping 50%, according to Google. Compared with the phrase, "show store locations," which is declining, during back-to-school season, searches for "shoe stores near me" spiked in August for the last two years in a row, and it more than doubled year over year. Consumers no longer need to search on their desktop before they leave home. The map sits in the palm of their hand.

In the past 30 days, searches in the United States for "back to school" in the Shopping category surged on July 12. The top state was Georgia, followed by Indiana, South Carolina, Arizona, and Florida, according to Google Trends.