I'm Not Even A 'Star Wars' Geek, And I Love Its App 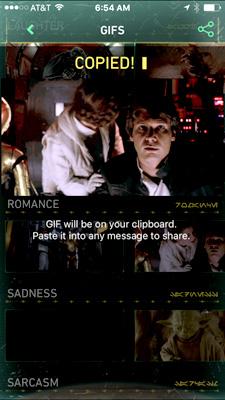 Promotional entertainment apps have always been a bit of a puzzlement to me. I often take them to be throwaways that seem to have become an obligatory part of blockbuster film rollouts. The advergame is among the most common and regrettable formats. Some conventional game engine gets skinned with the theme of an upcoming film -- and subsequently gets lost in app stores, never to be found again.

Coinciding with the marvelous “Inside Out” animated hit, Disney issued a game last month that integrated film characters into a bubble popping game that revived the classic “Bust a Move” mechanics. It plays fine, just fine. However, if you really get hooked on the gameplay, you soon start wishing the cloying characters would remove themselves.

But in the “Star Wars” app, Disney really gets it right. This is fan service and film promotion done up with super-serve style. As the cosmos gears up for J.J. Abrams’ take on the franchise, the app is designed to be both a news source for the pre-release run-up marketing as well as a sheer entertainment in its own right. Its cleverness becomes it. The app is satisfying largely because it makes use of most major mobile technical strengths and tropes, from geo-location to animated gifs, sound effects to selfies, even AR.

The app pulls in your own current weather and likens it to current conditions on one of the "Star Wars" universe’s many famed locations. Moving the phone even gives you a panoramic view of the scene. The animated gif section pulls classic scenes from the movie into your clipboard for reuse in any of your messaging or social feeds. There is the irresistible sound board (“It’s a trap!”). You can take selfies with overlays of familiar characters. Aim the app at the right movie poster, and an AR experience pops up.

And what would a "Star Wars" app be without an integrated Force Trainer that lets you make your way through levels of education for handling a light saber? Your phone becomes your weapon as you track the trainer droid, just as Luke first learned.

OK, I admit it: I have been taken in. This is a movie app that not only hits all the mobile buttons well, but tugs at nostalgia. It has the distinct advantage of being a movie franchise with unrivaled cultural resonance. But Disney is leveraging its best assets to fuel mobile habits with media.

The company did something similar with its recent release of a mobile keyboard that inserts animated gifs into text messages. They are very short bits of familiar cartoon and live action business that I spent an hour sharing with everyone from my wife and daughter to Mom. They all asked where I got it.

Mobility and the technologies of media-sharing have turned all of us into media makers. In one sense this displaces the traditional media makers. But it also puts them in a unique position to enhance and polish our conversations with formal media assets, shards of media memories -- the stuff that gets us talking.