Discovery Fares Better In U.S. Than Globally In Revenues 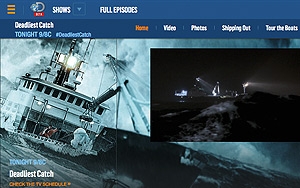 Revenues from its U.S. operations rose 5% to $814 million, partly due to a 12% gain in carriage fees from pay TV providers earning $357 million. Advertising revenues were flat at $447 million; though it had higher pricing Discovery also witnessed to under-delivery of ratings guarantees.

International TV networks fared worst on the advertising front -- down 8% to $367 million due to currency exchange issues. But removing that, as well as its Eurosport operations, Discovery advertising results grew 7% due to higher volume and pricing.

Affiliate fees for its international networks grew 12% to $418 million. Overall international revenue was up slightly -- 1% -- to $801 million.

Overall Discovery Communications revenues climbed 3% to $1.7 billion with net income sinking 25% to $286 million, due to currency issues, a gain from its Eurosport purchase in the prior year, and restructuring charges.

As part of that restructuring, one of Discovery’s high-profile shows on its TLC network, “19 Kids and Counting,” was cancelled. That brought on a charge of $24 million.