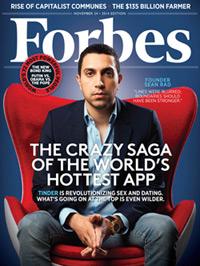 There was a time when every publisher thought they needed a social network of their own.

Perhaps in honor of those early days, Forbes just enlisted Tinder to help launch a network for its eminent “Under 30” members.

Developed as a mobile app within Forbes' own innovation incubator, the network is expected to debut during the second annual Forbes Under 30 Summit, in October.

The app includes activity feeds, member directories, a messaging feature, notifications, and, of course, plenty of networking opportunities. Content on the app will be developed for and by Under 30 members, some of which will appear on an Under 30 channel that Forbes.com plans to roll out in October.

Cadillac has signed on to host a launch party for its Under 30 app in San Francisco, in August.

From precocious entrepreneurs to moguls-in-the-making, Forbes’ Under 30 list presently includes about 2,000 members.

Salah Zalatimo, head of mobile products at Forbes, says the objective is simply to change the world. “Our Under 30 app is a tool we developed to better connect, empower and mobilize this community to help change the world,” she stated.